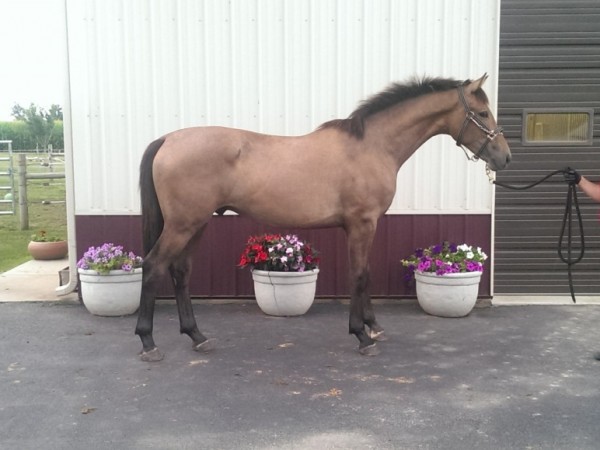 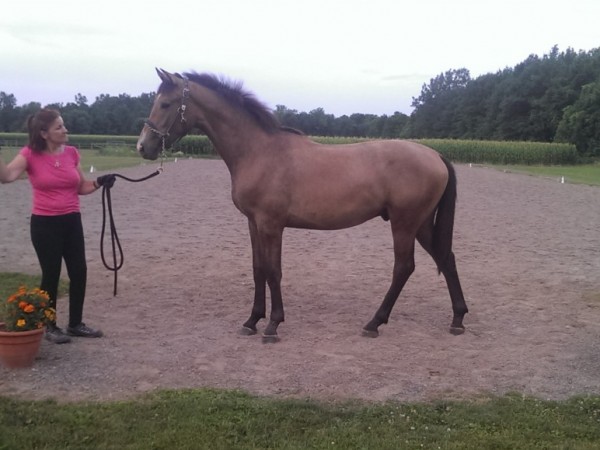 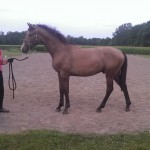 Javelin is a striking colt with his unusual dun coloring that will eventually grey out as he matures. Javelin's sire, Lagoheidor was Champion at his Oldenberg approvals in Germany and is one of a handful of stallions that not only competed in Grand Prix Jumping but in Grand Prix Dressage as well. Lagoheidor has been competed by an adult amateur rider, a true test of his willing and affable nature. The KWPN was so impressed by this stallion that he was approved as an Erkhend Stallion (his offspring are eligible to enter the KWPN studbook...no small feat for outside stallions!)
Javelin's dam is Gemini (Farrington/Ferro), who at 4 years old has just been started in dressage by her junior rider! She is like butter in your hands! Gemini's sire, Farrington, is a Keur stallion for the outstanding offspring he's produced both in movement and in rideability; whereas, her grandsire, Olympic Ferro, has received the highest predicate of Preferent due to his illustrious career in dressage as well as in the production of many of the top horses we see today in International competition.
Javelin has a good head on his shoulders and is easy to work with. He has 3 powerful, balanced and correct gaits. Javelin has a very pretty head and kind eye with a "look at me" presence. Javelin is a modern-type sport horse in the rectangular model with nice straight legs, a good shoulder and croup angle. Javelin would make an excellent mount for the adult amateur as well as the professional that wants a talented partner to take them to the top levels of competition. Javelin should mature between 16.2-17H